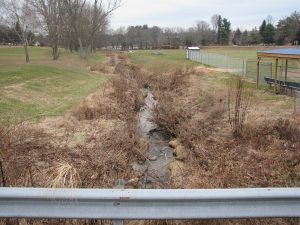 Over time, streams are often straightened to simplify the landscape to make way for roads, farming or houses. Straightening a stream negatively affects the biodiversity and water quality by increasing the vulnerability of the stream to flooding and erosion. Straightened streams run faster, often becoming deeper and more narrow. Habitats for spawning and protection for animals are lost. Fast moving water erodes the banks, removing soil and vegetation, which increases sediment, the number one pollutant of North Carolina waterways.

In 2013, the Henderson Soil and Water Conservation District (SWCD) partnered with multiple organizations to address concerns over an eroding streambank at Rugby Middle School in Hendersonville, North Carolina.  Henderson SWCD’s Community Conservation Assistance Program, Henderson County Public Schools, the North Carolina Department of Environmental Quality Division of Water Resources, the North Carolina Division of Soil and Water Conservation, Duke Energy and the Community Foundation of Henderson County collaborated to reconstruct Mill Pond Creek, which ran approximately 1,000 feet through the campus of Rugby Middle School. This section of stream had been previously identified as a significant contributor of sediment on public property in Henderson County.

The stream had been straightened, which overtime had also become incised. The steep banks on the stream were cut off from the flood plain. Vegetation was dominated by short mowed grass to the edge of the banks. Few trees remained along the stream and provided very little shade for the stream. Due to the physical deterioration of the stream, the water quality of the stream also suffered. Temperature, coliform, and nutrient concentrations had increased and dissolved oxygen levels were low. The presence of macro-invertebrates was nearly non-existent, all indicating an unhealthy stream. 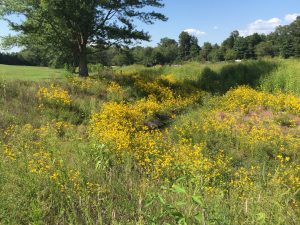 The district worked with skilled contractors to reduce the slope of the flood plain to prevent concentration of flow during higher than normal water levels, to add meanders to create riffles and pools, and to add streambank diversity with native plants to stabilize the stream bank. These changes improved the water chemistry of the stream. The water temperature was reduced and dissolved oxygen levels improved due to the presence of increased shade structures. The addition of riffles and pools, which replaced the straight runs, improved the habitat for aquatic life. The turbidity of the stream improved due to the reduced erosion along the stream banks because of the establishment of vegetation.

The stream restoration project also included an educational component. Signs were placed along the stream banks indicating areas of no mowing or high mowing to protect the riparian buffer and vegetative filter strip. Three informational boards were installed which detail the project from beginning to end, discuss design challenges and decisions, and provide information about stream health and stability, aquatic life and water quality. Rugby Middle School teachers are using the information to supplement their science lessons, and the public also has access to the signs.

Through the Mill Pond Creek Stream Restoration Project at Rugby Middle School, erosion was reduced and water quality was improved. As curves and meanders were added and native vegetation was planted, a healthy aquatic habitat was restored. The Henderson Soil and Water Conservation District was proud to be a part of this project, which helped to improve North Carolina’s waterways.