The National Association of Conservation Districts was established over 70 years ago in 1946 by a group of forward-thinking conservation district officials from across the country. These leaders recognized the need for a unified voice in natural resource conservation and worked tirelessly to ensure that conservation remained at the forefront of United States agricultural and environmental policy.

The success of NACD throughout the last seven decades is attributable to the diligent work of our supporters – from conservationists to early-adopter producers, to district officials and national conservation leaders. NACD is delighted to announce that its Hall of Distinction will recognize and honor past and present district official leaders who have helped pave the way for NACD’s accomplishments.

Dennis Fowler Getchell of Limestone, Maine, served on the Board of Supervisors for Central Aroostook Soil and Water Conservation District (CASWCD) in Maine from 1942 to 1951, and as chairman of CASWCD for eight of those years. During that time, Mr. Getchell was instrumental in organizing the Maine Association of Soil Conservation District Supervisors and served as its first president….

Clarence Durban served the Union Soil and Water Conservation District in Ohio for nearly three decades from 1961 to 1987. He was president of the Ohio Federation of Soil and Water Conservation Districts from 1975 to 1976 and president of NACD from 1985 to 1988. Before he passed away in 2014, Clarence farmed in southern Union County, Ohio, and was inducted into the state’s Agriculture Hall of Fame. In the early 1980s, he met with President Ronald Reagan to discuss the farm bill. Throughout Clarence’s long career in conservation, he worked tirelessly to represent the interests of Ohio’s conservation districts and NACD… 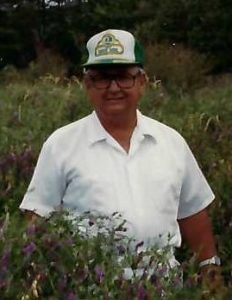 James Bellamy of Shallotte, North Carolina was elected to the Brunswick Soil and Water Conservation District Board in 1948. He served for over 49 years with 34 of those years as Chair until his passing in 1998. He enjoyed spending time working on his farm and implementing conservation practices that provided excellent wildlife habitat. He was also very active with Brunswick County Farm Bureau as well as Shallotte Lions Club. James was a leader from the moment he became a soil and water district board member. In 1964, he was elected as the North Carolina Association of Soil and Water Conservation Districts President. In 1965, he was then elected as Chairman of the State Soil and Water Conservation Commission, Chair of the NCASWCD Legislative Committee and a Council Member of NACD. He was instrumental in the implementation in the passing of Legislation to establish Drainage Districts in North Carolina. He helped to accelerate the NC Soil Survey Program and was involved in seeking funds…

Don Spickler would be the picture you see when you look up the definition of service. Don was active with districts on the local, state and national level for over 42 years. Don began serving on his local board in 1971 and maintained that service until 2013, when failing health demanded his retirement. While serving the Washington County Soil Conservation District he held all posts of leadership, including member, treasurer, vice chair and chair. Don served the Maryland Association of Soil Conservation Districts (MASCD) as a member, treasurer and president. Don is credited with helping move the Maryland Districts to a position of leadership in the restoration of the Chesapeake Bay by working with Maryland Governor Harry Hughes. Don was especially helpful in this project in the agricultural community because of his prior work with districts. Don served 12 years on the Maryland State Soil Conservation Committee (SSCC), including the position of Chair from 1982-1985. Don served on the NACD board and several committees, including as chair of the Urban Committee, and was NACD’s Northeast Region Chair. However, Don will always be remembered for his service as…

Widely known in the region as a successful owner of a large agribusiness company, farmer, and community leader, Miles also served as chairman of Daviess County Conservation District. In addition to serving on numerous agricultural and conservation organizations’ boards, Miles was a member of the University of Kentucky Board Trustees and Kentucky Agriculture and Environment in the Classroom (1996-2003). Miles also served in numerous leadership roles, as director of the National Fertilizer Association Executive Committee, director of the Kentucky Environmental Protective Association in the Classroom, president of the Kentucky Fertilizer and Agricultural Chemical Association, secretary of Kentucky Natures Preserves, secretary of the Kentucky Soybean Association, director of the U.S. Canola Association, director of Vanderbilt University Hospital in Nashville, Tenn., and chairman of the National Fertilizer Association (TFI). Miles also provided his knowledge and leadership as a member of the Governor’s Task Force on Agriculture, the Governor’s Task…

Wade Troutman epitomizes selfless dedication to the sustainability of our natural resources. He has quietly left a lasting impact on conservation throughout Washington State. Troutman has served on the Foster Creek Conservation District (CD) board of supervisors since 1982 (37 years, and counting). He has lived in Douglas County all his life and resides in the house in which he grew up. Troutman has carried on the conservation…

Here’s how you, or someone you admire, can receive the honor: