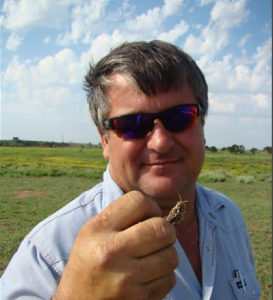 Kenneth McAlister and his wife of 33 years, Diane, own and operate farmland in Wichita and Wilbarger Counties in Texas. They have three sons – Brandon, Matthew, and the late Zachary McAlister. Kenneth started his wheat, cotton, cattle, and grain sorghum operation 32 years ago. Twenty years later, he started using minimum tillage to prepare the ground for cotton and found shortly after that no-till provided even greater benefits. He also plants cover crops to keep his soils protected, and is increasingly using a crop rotation, incorporating canola, sesame, beans, barley, and oats. “With the multiple crop rotation we have found organic matter and infiltration to be much higher,” Kenneth said. All together, these conservation practices have led to better overall soil health.

Kenneth’s father “is old school,” he says, and believed the ground should “be smooth as glass.” But with all the benefits Kenneth has realized on his farm using conservation practices, he says his dad “is coming around” to the idea of no-till and leaving residue on the ground. “Trying it on a small scale, working through different problems to find what works or not, is still in play,” Kenneth says, but “we hope our data will help our county overcome some of its fears so we can head in the direction we all need to go in for our soil health.”

The biggest challenge in practicing soil health systems has been “not knowing whether it’s going to work,” Kenneth said. For one, the use of cover crops has made managing for soil moisture more difficult, but fortunately, “seeing results in the infiltration rates and our soils’ ability to store water for later use has been great.” Kenneth also mentioned that keeping good records on the performance of a soil health practice has been challenging with weather variability.